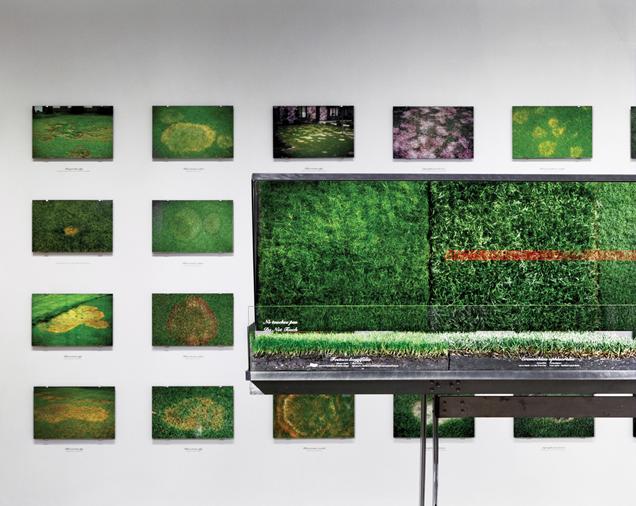 The ‘tell-ers’ are interested in the invisible frontiers of architectural culture, the underlying assumptions and conceptual bare grounds from which spring arguments in the forms of buildings. The CCA produced one of the best of these exhibitions, Elizabeth Diller and Ricardo Scofidio’s 1998 The American Lawn: Surface of Everyday Life. Another seemingly banal surface of everyday life was on show in Asphalt (Asphalto at the 2003 Milan Triennale), a version of which curator Mirko Zardini brought to Montreal when he assumed duties as CCA director in 2005. At the colloquium, Zardini called for exhibitions ‘Not of architecture, but about architecture.’ Both Lawn and Asphalt were revelatory and deeply sensuous in their choice of imagery and collected objects, pulling back the covers of the obvious to reveal the naked structures of underlying urban landscapes.

Coming to the CCA from Italy at the same time is ex-journalist and curator Giovanna Borasi, whose major exhibition Journeys: How Travelling Fruit, Ideas and Buildings Rearrange Our Environment was on show while the curatorial debate continued just down the hall, and demonstrates the perils of exhibitions that tell more than they show. The problem with Journeys begins in its sprawling title, and its concatenation of 15 vaporous ‘themes’ (such as “wayfinding,” “inheritance,” and “drift”) collected in commissioned short stories with bibliographies from 15 contributors, none of them short story writers. Predictably, these vary in literary quality, making the accompanying book — like the exhibition — more to be admired than enjoyed.

As installed in the fine CCA galleries designed by Peter Rose and Phyllis Lambert, Borasi’s show is a walk-through book, one of the most text-heavy and image-thin architectural exhibitions I have ever toured, a problem accentuated by the necessity in bilingual Montreal to double all wall and caption texts in both English and French.

The over-arching theme of Journeys seems to be that the world has been transformed by the transmission of genetic codes, people and ideas. These processes of interconnectedness may be news in old imperial capitals like Moscow, Beijing or Rome, but they are the everyday experience of New World cities such as Los Angeles, Buenos Aires or indeed, Montreal. This said, the scholarship of Journeys is impeccable, and this research project may yet yield vivid texts and displays when latched onto specifics, not ‘globalities’ — that unfortunate neologism that means the collision of the global with banality.

The curatorial ‘show-ers’ at the Mellon Colloquium demonstrated weariness from too much time spent in the arid vaults of architectural archives, or the living archives of the plan drawers and back-up hard drives of designers currently in practice, trying to piece together profundity out of the everyday ephemera produced in shaping buildings. One of these was colloquium participant Anthony Vidler, who joked that ‘I was incarcerated in the CCA archive for three years’ while preparing his exhibition James Frazer Stirling: Notes From the Archive (AR December 2010), which will be on show at Tate Britain from April next year.

That time locked up in the Montreal archive was spent reducing the 44,000 items in the CCA’s Stirling-Wilford collection into the 350 items that constitute his exhibition — drawings, sketches, models, even ephemera like doodles on train tickets. ‘An archive gives us a process of design,’ argues Vidler, continuing that his exhibition is ‘not a monograph or biographical show.’

Describing himself as ‘an accidental curator,’ Vidler declared that ‘Exhibitions can have a role in opening up ideas about their subjects. I believe in the didactic role of exhibitions.’ The difference between this ‘show-er’ and the ‘tell-ers’ is that his lessons are conveyed through visuals, rather than applied narratives. It will be up to viewers at Yale, then the Tate Britain to determine whether the Stirling show lives up to its curator’s intention, which was stated in Montreal as: ‘How modern architecture mediates between technology and art.’