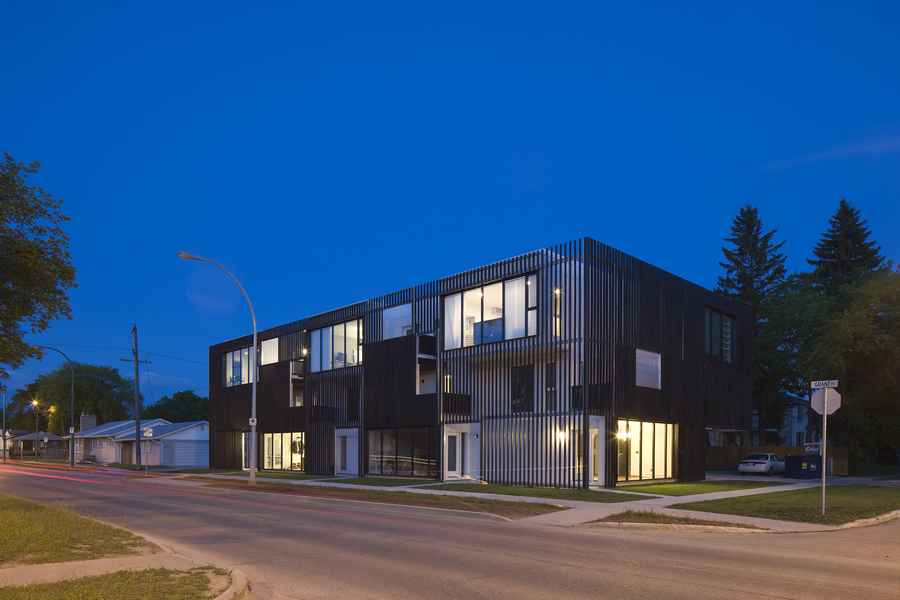 Half a decade into this global recession, there is scant evidence of the profession rising from its fluffy bed of Aestheticism Nouveau to again confront the creation of mass housing that people can actually afford. In Canada, au contraire bien-sur: Frank Gehry’s recent presentation of a staggeringly dense cluster of three calypso-ing condo towers for Toronto’s Mirvish family; a Foster’s team under Nigel Dance opening Vancouver’s muddled Jameson Tower (amazingly, the mega-firm’s first constructed high rise apartment building); and in the same city, BIG from Copenhagen’s recent design for a luxury tower so twisted – as it rotates up through its 49 storeys – that local wags have started calling the firm’s principal partner “Torque Ingles.”

Then there is Winnipeg.  Flat, boxy, constant, prairie-values Winnipeg, the railway hub born in the hopes it would become the next Chicago, but ended up as Dubuque with more snow.  It is no accident that humble, isolated Winnipeg has created Canada’s most exciting new architectural firm in a decade, one dedicated to applying design innovation to the humblest of tasks, a plains-born, good-humoured, resolutely resourceful verve for building housing modestly, but with elegance.

This is all in evidence in Block 10, one of the more accomplished works to date from the telephone-numbered young firm of 5468796 (don’t bother dialing—their number has been changed!)  To their credit, 5468796 is dedicated to changing the number on the sometimes profound, sometimes fey line of precious wood-and-concrete pavilions and villas in natural settings that has defined Canadian architecture for a generation, notably through the designs of Toronto’s Shim + Sutcliffe, Quebec’s Pierre Thibault, and fellow native Winnipeggers, John and Patricia Patkau.

A three storey timber frame apartment block on the most ordinary corner in an inner suburb, Block 10 could hardly be more different than the artful, occasionally arty creations of this older generation. Grant Avenue is a City Beautiful boulevard with mature trees set along its median, but lined with “walk-ups” and small strip malls filled with gyms, candy stores and a full menu of Asian restaurants: Thai, Chinese, Pilipino and Vietnamese (mid-continental Winnipeg has been transformed by waves of industrious immigrants from that continent.)  The walk-up apartment is the degree zero of affordable apartment construction in Canada—three storeys in wood frame, dank lobby, small windows, and doubly-loaded corridors that always, always smell of boiled cabbage (one third of Winnipeg’s population is of Eastern European origin.)

From Vancouverism to Hybrid City